Please note that the content here will be almost identical to the Rod Library exhibit but the format of the display may vary. The panels in the library are displayed from left to right on this web page. Many of the images here are available free with attribution here.

To access the underlying Humanity and Society journal article click here or request Speaking Graffiti: Imaging Human Rights From Belfast to the West Bank from Inter-Library Loan in the Rod Library.

Some of the images here, (and a few others), are available free with attribution here through Creative Commons.

The first grouping below is contained in the left hand panel in the Rod Library Exhibit.

‘You are now entering free Derry’ is a well-known inscription at the entrance to Bogside, a working-class neighborhood in what is known as Londonderry to Protestants and Derry to Catholics. It is near the site of the infamous Bloody Sunday event, where in 1972 twenty-eight unarmed Catholic civil rights protesters were shot by British troops and fourteen died. Just off Hebron Road at an entrance to Dheisheh Camp is a low wall with painted text that rephrases the Irish Republican territorial warning (itself a reference to protests in Berkeley, California in 1968). To transpose this image from an America University town to Catholic minority ghetto in Northern Ireland then to a Palestinian refugee camp deserves notice as an example, a tendril or rhizome, of transnational human rights image-making. "You are now entering free dheisheh" above May 2014.

You are now entering free Dheisheh above July 2006. The persistence of some graffitos is notable especially near portals like the entrances to refugee camps and military checkpoints.

Ahmed Hmeedat, a graffiti artist from Dheisheh Camp, in front of his painting of George Harbash. Harbash was a co-founder of the Popular Front for the liberation of Palestine (PFLP). May 2014

The graffiti artist Hamza Abu Ayyash painted this work in Ramallah during late 2008 during Israel's Operation Cast Lead in Gaza. He effectively uses the stencil technique to detail the child angel's face, evoking news stories from that time of children as casualties. According to Ayyesh the text reads, “The days we die is our birthdays” or transliterated "Born to die".

A diptych stencil of Qusai Suleiman al-Afandi in the Deheisheh Palestinian Refugee Camp near the West Bank town of Bethlehem. Al-Afandi, became shaheed or was martyred during January 2008 by Israeli troops during a raid into Bethlehem. June 2008

The next grouping below is content from the center panel of the Rod Library display.

The Bobby Sands mural on a Sinn Fein bookstore in the Republican Falls Road area of West Belfast, July, 2018. According to Republican muralist Danny Devenny, "We usually repaint murals but we kind of got to like that one". 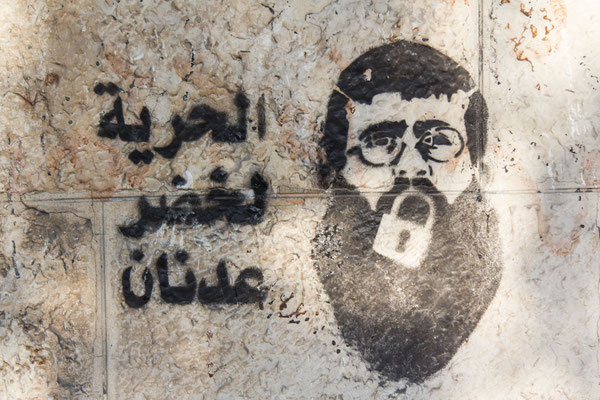 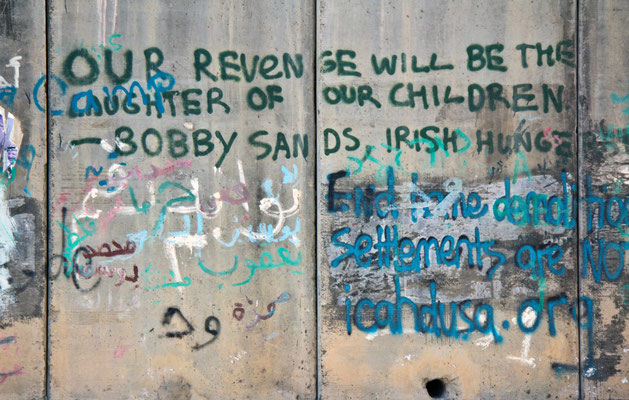 This mural by Hamza Abu Ayyash was near Bethlehem University in September 2012. The text by a Palestinian poet and former prisoner named Nayef Bazzar reads: "My guts declares my identity." Sometime during early 2014 the imagistic portion of the mural was whitewashed. February 2014

The next grouping below is content from the right panel of the Rod Library display.

Near Al-Quds University in Abu Dis was an impressive protest tourist graffito, depicting crucified dove. The University is within sight of Jerusalem and the Old City but cut off from it by the separation barrier. Al-Quds is the Arabic place name for Jerusalem. June 2006.

A mural on the Republican International or Solidarity Wall in Belfast Northern Ireland by Republican muralist Danny Devenny depicts a Palestinian woman confronting an Israeli soldier. The text in both Gaelic and Arabic translates as "Our day will come".  July 2006

In the summer of 2008 the previous image was repainted by Danny Devenny on the sixtieth anniversary of 1948 events, known as The Nakba, or catastrophe, by Palestinians. The image is a complex intertextual quote, depicting the Israeli separation barrier on an actual separation barrier between Republican and Unionist neighborhoods in Belfast. July 2008

The Warsaw, Compton, Bethlehem graffito is persistent. The earlier version appeared in 2007. The version immediately above reappeared after it had been painted over at the same location in 2014.

The images on display in Rod Library are from a research project by Professors Philip Hopper (Department of Communication and Media) and Evan Renfro (Department of Political Science). The project is called: ‘Speaking Graffiti: Imaging Human Rights from Belfast to Ramallah’.

We show that by paying close attention to human rights related graffiti in such disparate (and desperate) locales as Northern Ireland and Palestine, we can find fresh avenues for analysis involving human rights locally and globally.

Importantly, all of the graffiti we show and discuss was produced by local artists actually living in the affected areas, and whenever possible we have interviewed them.

Both of the authors have traveled extensively in these areas, and both are conversant in Arabic. All of the images were taken by one of us (Phil Hopper) while on teaching and research assignments in the Middle East, including year-long a Fulbright in the West Bank. Out of thousands of images, we have chosen 18 as particularly interesting for our project.

Our approach allows for both the academic community and a more general readership to gain a deeper appreciation for human rights graffiti ‘written’ by oppressed communities.

While the human rights conditions of Northern Ireland and Palestine have been analyzed up, down, and sideways by a robust scholarly literature, this project provides a different approach to viewing human rights conundrums through images of localized as well as globalized ‘graffiti’. With a lens pointed on Palestine and Northern Ireland, we examine this cultural artifact’s power to get attention, obstruct persecution, and ultimately to mitigate some human rights abuses. How does such graffiti work? What are the similarities and differences in their power for enhancing human dignity through different times and places?

We encourage the viewer to also note the relationship of human rights graffiti to current political trends internationally. This project is designed to help explain the broader implications of political graffiti for the study of human rights.

Through a cross-cultural comparison of the graffiti, murals, posters and other similar artifacts in Northern Ireland and the Palestinian West Bank our goal is to identify some truths about the nature of these images and the conflicts that they represent. Most of the muralists and graffiti artists that we have spoken to see words and images as fully integrated. In these forms of expression words often become images, and images become words, which produces new types of human rights-centric perspectives.

Can you read a mural? Yes, if you pass by it on a daily basis you are a translator. To you, the hypothetical or actual pedestrian, this image/text is no longer one thing or the other. It simply is. As in part of your long-term memory of the place. It is spatial because you walk by it every day and the image probably does not animate or move from the wall. It is temporal because over time your memory will retain some faded version of it, even if the image is replaced or defaced. Can you speak graffiti? Yes, if you tell others of it. Sharing the image narratively serves as a proliferative technique, that in itself possesses political properties capable of transcending the spatial and the temporal. Consider the refugee grandmother using words to elucidate for the grandchild an image on a wall that no longer exists. What work did that image do? Why is it no longer there? What will its affective power be for the new generation?